Anita D. Russell’s book, ”I Wanna See Laney’s House: A Sibling Story” (Xulon Press), reveals a decades-long journey of deliverance through spiritual growth and mental wellness. It begins with a tragic moment at the family home on Linden Avenue in East Pittsburgh. A dark night of the soul unfolds when one sister is hit by a car and the other hit by depression.

I have a riddle for you: How does a 5-year-old girl recover from depression?
Answer: One decade at a time.

Therein lies my story, a life filled with joy, laughter and sunshine ultimately morphed into a quest for mental wellness over several decades. On September 6, 1962, I became a depressed little girl after witnessing the death of my 3-year-old sister, Laney, who was hit by a car in front of our house. On that day I disappeared, and no one could see that I was gone. I suffered from the internal bleeding of emotions I did not recognize nor understand; emotions that I did not have the language to express, articulate or process. I suffered from the pain of grief that dragged me into the dark, melancholic space of depression.

Amid childhood depression, a lifetime walk with God began with a vision, a spiritual encounter, as I stood in front of the funerary box that held my sister. At that moment, God did two things: First, He allowed me to see my sister, sitting up and smiling, engulfed in an indescribably peaceful glow that let me know she was okay. Then God spoke His words into my spirit — “I will never leave you nor forsake you” — letting me know that no matter what I go through in life, He will be there, and I will be okay. Thus, my life journey began.

As I silently blamed myself for Laney’s death, depression became entangled with guilt. By the time I hit my teenage years, I showed the signs of high-functioning depression, which means I was able to function somewhat normally while struggling internally, particularly with the belief that I simply did not deserve to be here.

I wrestled with suicidal thoughts manifested in self-injury. The bathroom in my house became my war room, the place where I would retreat whenever the struggle was overwhelming. Sometimes I prayed, sometimes I cried, sometimes I cut. Ironically, vivid memories of the time before Laney’s death is what saved my life. Every time the knife was close to cutting deep, I saw us playing, laughing and enjoying life as children ought; and the cutting momentarily stopped. The cutting completely stopped by the time I went to college, yet depression was still my hidden companion.

Years later as a parent, I finally took the first bold step towards mental health recovery after experiencing a vision. While watching my two young daughters at play on the street in front of our Woodside Avenue house, I saw my sister and me at play on that day in 1962 on the street in front of our Linden Avenue house. As I watched these two scenes play out simultaneously, I broke through years of guilt and blame with the revelation that nothing I did caused Laney’s death, nor was there anything I could have done to prevent it.

I was just a kid myself and, like Laney and my own children, just as carefree, enjoying life as children ought, without an inkling of an idea that something tragic could happen. That’s when I decided to seek pastoral counseling. I was able to open up and talk about my sister’s death in a way that I had never done before. I confronted my depression head-on, addressed the burden of guilt, and slowly began to feel okay with myself.

I became acquainted with the concept of Adverse Childhood Experiences (ACEs) during Mental Health Month in May of 2018. I attended a workshop hosted by Steel Smiling, a local nonprofit. During the workshop, participants took the ACEs test, 10 questions that address specific experiences before the age of 18, in three categories—abuse, neglect and household dysfunction. Possible risk outcomes are related to behavior, physical and mental health.

My ACEs score was 4. A score of 4 or more is associated with the risk of problems later in life.  In my case, the problems were depression, suicidal thoughts and self-injury. After the workshop, I decided to become a certified Mental Health First Aid Instructor to help educate, advocate and increase awareness of mental health issues.

I often wished that my family had had more awareness of mental health issues. If they had only known that a child facing the tragic death of a sibling at a young age could be such a traumatic experience. If only they could have gotten me the help I needed then. Despite my family not having much awareness then, I am able to use my personal experience and the knowledge of mental health first aid to build that awareness now.

I now connect to others by providing Mental Health First Aid training to community members and organizations.
I now share my story to exert power over depression and to sustain mental wellness. "To SOAR is to grow fearlessly with vision, purpose and action." 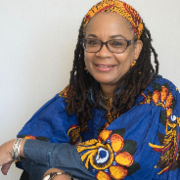 Anita the founder/CEO of The Place to SOAR, a Pittsburgh-based social enterprise dedicated to cultivating change through daily growth and personal development. The primary components of the SOAR concept—Step Out And Redesign—include the SOAR Coaching Academy for adults and the SOAR Youth Empowerment Program for developing leadership in teens ages 13-18.