Using fear as a positive motivator occurs when you decide to take a risk.

With every risk you take,  you will encounter with it, an element of fear.  In order to be successful you must engage in risk-taking activities.  You see, it is how you respond to the fear which makes the difference between success and failure. 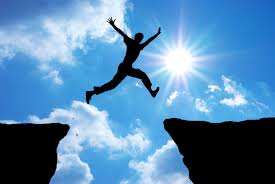 Choose to cower at this fear and you are sure to fail.  Choose instead to engage the fear and let it motivate you to action, then and only then will you succeed.

“You cannot surrender to fear, but you can use it as a kind of fuel.”–Jose Torres

Learn to control fear in order to make it work for you.  Soon, you will find that it has become your best friend.  You will then look forward to the engagement of fear because you are confident that you will overtake and overcome it.  Practice makes perfect.

“We must stop assuming that a thing which has never been done before probably cannot be done at all.”–Donald M. Nelson

When things go wrong, as they sometimes will,
When the road you’re trudging seems all uphill
When the funds are low and the debts are high,
And you want to smile, but you have to sigh,
When care is pressing you down a bit
Rest if you must, but don’t you quit.

Life is queer with its twists and its turns,
As everyone of us sometimes learns,
And many a failure turns about
When they might have won, had they stuck it out.
Don’t give up though the pace seems slow,
You may succeed with another blow.

Often the goal is nearer than,
It seems to a faint and faltering man,
Often the struggler has given up
When he might have captured the victor’s cup;
And he learned too late when the night came down,
How close he was to the golden crown.

Success is failure turned inside out
The silver tint of the clouds of doubt
And you never can tell how close you are,
It may be near when it seems so far;
So stick to the fight when you’re hardest hit,
It’s when things seem worst that you must not quit!
–Unknown

Things to think about:

1.  When wisdom reigns, it pours
2.  Fear and worry are interest paid in advance or something which may never come
3.  The faith to move mountains, always carries a pick
4.  People are born originals, but most die copies
5.  Ideas go away, but direction stays
6.  Your problem is your promotion
7.  Being a servant won’t make you famous–JUST RICH!

Many entrepreneurs have learned that in the moments where everything was at stake and the fate of their business was on the line is when they had their most creative ideas come to surface.  This is because instead of running from the fear, they used the fear as a positive motivator by opening up their receiving channels. Let fear open your mind to find solutions.

The Prosperity Team is here to help you overcome all your fears and lead and guide you into success.  All you have to do is “plug in.”