When you are on one of the scenic views in the Rocky Mountains you feel like you are on top of the world. I never thought when we moved out east that I would miss the mountains that I have seen my whole life. We lived in the foothills. I woke up every day to the purple mountains majesty.
In the summer we would go for drives in the Rockies to cool off.
The mountain air was cool and the creeks were cold. We would stop and put our feet in the water. The water was runoff from the higher mountains where the snow was melting.

The lands now known as Rocky Mountain National Park have been home to humans for at least ten thousand years. The landscape reflects the culture of the people who have walked it, from Native Americans to its visitors today.

While massive glaciers shaped the meadows and peaks, Rocky was an inhospitable land. It was not until some 11,000 years ago that humans began venturing into these valleys and mountains. Spearheads broken in the fury of a mammoth's charge and scrapers discarded along a nomad's trail tell us little about the area's early native peoples. Even though it was never their year-round home, the Ute tribe favored the areas green valleys, tundra meadows, and crystal lakes. The Ute Indians dominated the area until the late 1700s.
With the 1803 Louisiana Purchase, the U.S. government acquired the land now known as Rocky Mountain National Park. Spanish explorers and French fur trappers skirted the area.

The Pikes Peak gold rush of 1859 drew hopeful miners and speculators. Their settlements at places like Lulu City. The rousing boom times yielded to an industrious homesteading period starting in the 1860s. Harsh winters proved inhospitable to grazing.
The abundant bears, deer, wolves, and elk howled through the trees and the mountains continued to draw Easterners impressed by the landscape. Mountain water proved more precious than gold. 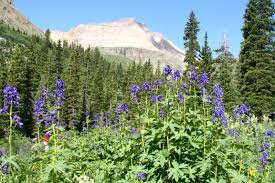 With the ranchers and hunters and miners and homesteaders came tourists. By 1900, the growing national conservation and preservation movement, led by Theodore Roosevelt, Gifford Pinchot, and John Muir, advocated an appreciation for nature.
The Estes Park Protective and Improvement Association fostered local conservation efforts. "Those who pull ....To read more visit: http://judyg-246.blogspot.com/2013/12/feel-like-youre-on-top-of-world.html
Thank you for reading.
Views: 27
★
★
★
★
★
Votes: 0
E-mail me when people leave their comments –
Follow