4
I wanted to share with you a little history of the town I came from Longmont Colorado. 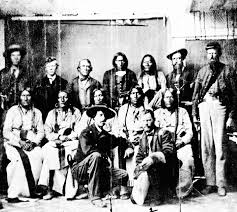 1800 - Arapaho Indians move into the area from further north, often hunting and camping in the St. Vrain Valley.
1820 - Major Stephen H. Long leads an expedition for the U. S. Topographical Engineers along the South Platte, draws first maps of region.
1838 - Bent, St. Vrain & Co. build a trading fort near where a small river flows into the South Platte. Trappers begin to call the stream St. Vrain's creek.
1860 - Alonzo N. Allen moves his partially completed cabin from Boulder Creek to St. Vrain's creek, near the confluence of St. Vrain and Left Hand Creeks.
1861-70 Town of Burlington grows up around the Burlington Stage stop, where the Overland Stage crosses the St. Vrain. (Overland Stage route is modern U. S. 287, Main Street in Longmont).

1870 - The Denver Pacific and the Kansas Pacific railroads reach Denver, making travel to Colorado much easier.
1871 - The Chicago-Colorado Colony chooses a location, plats the original square mile and settles their new town, naming it Longmont. Residents of Burlington move themselves and most of the buildings to Longmont, about a quarter mile north.
1873 - The Colorado Central Railroad completes track from Golden to Longmont.
1876 - Colorado becomes a state.
1879 - Fire destroys the 300 block of Main Street in Longmont. The downtown is rebuilt in brick.
1887 - John H. Empson opens the J. H. Empson Cannery in Longmont, canning peas and other vegetables.
1898 - J. C. Penney opens a butcher shop on Main Street. After failing in this business, he worked for T. M. Callahan's Golden Rule Store in Longmont. Ultimately, Penney would set up a Golden Rule Store in Kemmerer, Wyoming that would be the beginning of his retail empire. 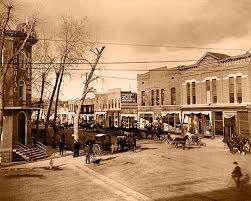 1899 - The first official Pumpkin Pie Days for which Longmont became famous, baking 10,000 pies for people coming from all across the Front Range. The original Pumpkin Pie Days were held from 1899-1915.
1900 - Theodore Roosevelt makes a campaign stop in Longmont.
1903 - The Longmont Sugar Factory built. Soon renamed the Great Western Sugar factory, it played a vital role in farming and the development of Longmont.
1905 - Masonic Temple on Main Street burns down, but the Dickens Opera House next door is saved. The Masonic Temple would be rebuilt.
1908 - Longmont High School "Beetdiggers" became the "World Champion Interscholastic Football Team" beating Chicago's Englewood High in a Christmas Day game in Denver.
1911 - Longmont builds a hydropower plant on the North St. Vrain river, providing reliable electric power to its residents. 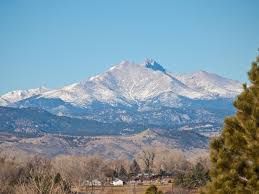 1913 - The Carnegie library in Longmont opens at 4th Ave. and Kimbark St. Also, the greatest snow in the history of the area occurs.
1918 - Great influenza epidemic forces City Council to ban public gatherings, but many Longmont residents die in spite of precautions.
1925 - The Ku Klux Klan, riding a wave of statewide popularity, elects a majority in the Longmont City Council. The Council began ousting longtime City officials and replacing them with Klan members.
1926 - City Council, controlled by the Klan, votes to build Chimney Rock Dam, a combination water storage and hydropower project, located just above the existing Longmont Dam on the North St. Vrain. Cost estimates rise from $85,000 to $350,000.
1927 - All Klan candidates for City Council are defeated in the April election, and construction is halted on Chimney Rock Dam.
1930s - Many area farms are lost during the Great Depression.
1941-1945 Longmont citizens serve around the world during World War II. In Longmont, the Great Western Sugar dormitory at 3rd Ave. and Kimbark St. is converted to house Italian and German POWs who then worked on area farms.
1946 - Gibson Manufacturing Co. opens a tractor factory in Longmont, the first new heavy industry to locate in Longmont in over forty years. Production of Gibson tractors ceases.

I love history. I guess I was missing my home town. Thinking about some of the people I new when I was younger.
May be if they would have had Laminine they would still be here today. Laminine is a unique and patented formula that provides essential proteins and amino acids. To read more visit