Next month will be the tenth anniversary of my father’s death.  It sure does not feel like that long ago.

My father was the all-around smartest person I have ever known.  He had no college degree, but he could carry on a conversation with anyone on virtually any topic.  He simply knew something about everything.  He was loving and affectionate.  He was also very funny.  He told hilarious stories, and he was not embarrassed to act silly on occasion.

I recently posted a photo of my dad standing in Ducker’s Deli, the restaurant he owned for 25 years.  He then retired and closed the business in 1980 - 33 years ago!  I shared the photo on Facebook group to which I belong where all the members grew up in the area I did. 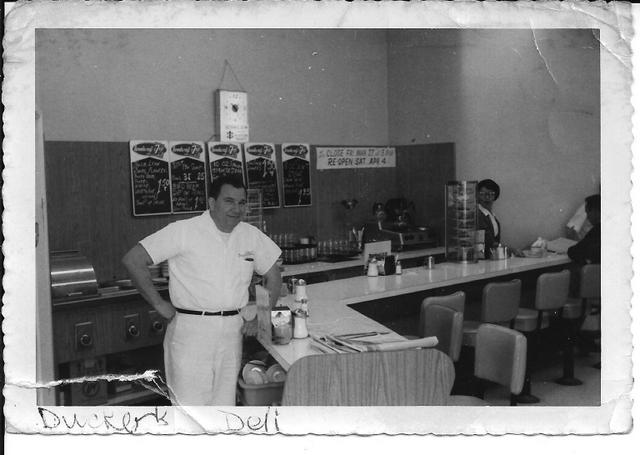 I was very touched to see how many people remembered my dad and the restaurant he owned.  Here are just some of the posts that the group members wrote.

Jon Haimowitz: we ate there all the time... and i recognize your dad’s the man behind the counter

Debbie Mark: we ate there too

Glen Crosse Sr:I remember. I lived near there

Michelle Ducker Scharf: It was very well known in the east valley. I remember wherever I went people would ask if I was related to Duckers Deli. So proud to say yes....this is exactly how I remember Uncle Saul.

Hillorie McLarty: Ate there many times. Sad to lose a great deli

Steve Fischler: xlent Lox ... dad would go up there on Sunday a.m.

Bob Wortman: I worked up Woodman and would go there for lunch, good all-around place...

Julie Klein: Thank so much for all the nice comments. I love that so many people remember my dad and Ducker's.

Steven Koenig: Remember it well, right by the Owl Rexall Drug Store and Burghardt Market. We lived a couple of blocks away.

Michelle Ducker Scharf: There will never be delis like that one. Some imitations exist but none close.

Julie Klein: Yes cuz, I agree! Without my parents' touch, all the rest are "just" delis.

Larry Epstein:  Is true they the owner of Brent's deli started at duckers

Julie Klein: The original owner, Brent, worked for Saul Ducker for years. He sold his restaurant to Ronnie who also worked at Ducker's. Brent & Ronnie were trained by the best! Brent's is the only deli in the area I'll go to when I visit there.

Being close to the holidays, all these wonderful comments are a gift to me.  My dad was well-liked, well-loved and well-remembered.  I could not be more proud to call Saul Ducker MY DAD!

For affordable discount plans to reduce your Health and Dental expenses AND reduce costs on Hearing, Vision, Prescriptions, Roadside Assistance, Lifelock™ and even more, visit: http://ibourl.net/XpressSavings (NOT insurance).