”A Test Of Sanity" is the 17th in my 2022 series of articles based on my real life experiences, professional insights, personal views and fun stories. My hope is that in them you find joy and inspiration.

A TEST OF SANITY
by Joseph Tom Riach

My lack of employment was getting me down. In fact it was driving me mad. Each day out of work had become a test of sanity for me. But every cloud has a silver lining. There's always tomorrow ...

Smartly dressed, hair combed, tie straight and in good time, I arrived for the job interview. The receptionist politely informed me that the first part of the appraisal process would comprise of a spatial ability psychometric test. I failed immediately by being totally clueless as to what the heck she was talking about!

I was soon enlightened. She showed me into a tiny room in which there was only a small table and chair. On the table was a board with nine different shaped holes. Beside the board there were nine different shaped blocks. There was also a pack of twenty cigarettes, a box of matches and an ash-tray.

The examiner arrived and told me that I had thirty minutes in which to place the nine different shaped blocks into the appropriate holes on the board. He blurted, “Your time starts now!” and dashed from the room. I sat down, picked up each of the blocks in turn and placed them into their matching holes on the board. Task completed. I sat back to wait out the remaining twenty-nine minutes and forty-five seconds.

With nothing else to do, and although a non-smoker, I opened the pack of cigarettes, just out of curiosity. I withdrew one cigarette and again, just to pass the time, lit it up. It seemed like as good a time as any to try out smoking. I coughed and spluttered my way through the weed and stubbed out the butt in the ash-tray.

Then I took all the shapes out of their holes … then put them back in again. Time was dragging so I lit up a second cigarette, smoked it, then stubbed it out in the ash-tray beside the remains of the first one. Then I repeated the pegs in/pegs out process and had another fag. I went through the routine over and over until I had taken the pegs in and out of their holes several dozen times and smoked all but one of the cigarettes. A thick fog filled the room.

Eventually I drew on the last cigarette, took all of the pegs out of their holes and had just replaced the first of them into its space when the door of the room burst open.

“Stop!” commanded the examiner. He looked at the board with just one peg in its hole, then to the ash-tray with its glut of discarded butts. He waved a hand at the choking smog, looked with pity at my grey face, open tie and decidedly disheviled appearance. With a wry smile he gloated, “Yes, it's a hell of a test!”

Some time later he returned to the canteen where I was recovering over a much needed cup of tea. “Good news,” he announced, “One peg out of nine is 11.11%. The pass mark for the psychometric test is 10%. Congratulations.”

“Fabulous,” I lied, as relieved as I was baffled. “So I have the job. When do I start?”

“Oh, you haven't got the job. No way. The position is only open to non-smokers!”

I stifled a scream into the sleeve of my jacket … then raced for the nearest pub.

Consoling myself over a large whisky, and then another, I reasoned that being unemployed was maybe not so bad after all. Failing a test of sanity at least left me free to indulge my madness in my own time. What's that I said about every (smoke) cloud and silver linings?

Claim your special copy of my best-selling novel – 'Too Early For A Glass Of Wine?' - by clicking on the image below. 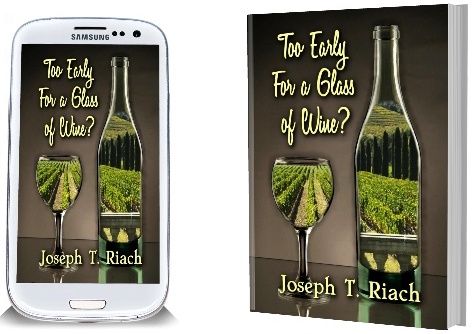 A TEST OF SANITY  is an original copyright Tom Riach feature.
I hope you enjoyed this short article and found it to be of value.
To learn more please visit me on my Author Page.
See you there! Regards, Tom.