"How To Close A Deal" is the nineteenth in my 2022 series of articles based on my real life experiences, professional insights, personal views and fun stories. My hope is that in them you find joy and inspiration.

HOW TO CLOSE A DEAL
by Joseph Tom Riach

The six in the morning glint in farmer Sandy Duncan's eye was induced little by the watery, winter sun rising over the Grampian hills but much by the mischief occupying his mind. Thumbs entrenched in classic rural manner around the bib of his mucky dungarees and chewing on unlit clay pipe, he was leaning by the gate of his 'bottom field'; that rough tangle of gorse and weed farthest from the farmhouse, lowest down by the stream and a veritable bog of sodden misery lieing in wait for the unwary.

He turned his eye to the mud, gravel and pot-hole mosaic of track lurching upward from his lolling point and scanned narrow-eyed for his prey. A thin smile glanced his lips. His intended victim was to be yet another 'pretentious, pinstripe-suited, city slicker' lured at unholy hour to this ungodly spot by Sandy's vague insinuation of 'lucrative business to be had', only to be waylayed in the stinking myre of Sandy's midden and sent empty-handed on his way, a muddied and humiliated mess.

But as Sandy caught sight of the old and battered Land Rover weaving its way along the lane towards him, his eye-brows furrowed, the image of his perfect ambush wilted somewhat and his pipe sagged in his lips. What was this?

I pulled the Land Rover to a halt with a squelch and not unimpressive slither, smack in front of Sandy, threw open the door and jumped out. He was crestfallen to see that I wore knee-high wellington boots, denim jeans and a tatty Barbour jacket. Before he could say a word I fearlessly grabbed his sharn-spattered hand, shook it vigourously and proclaimed, “Good morning Mr.Duncan, this is quite some place you've got here. I'm told you have the finest beasts (cattle) in the glen. Can we go see them now?!” A canny pause while he scrutinized me thoughtfully, then a drawn out, “Aye, we can that.”

Twenty minutes and a soggy sludge through the fields later we were close up and personal with his prize herd in the byre (cow-shed) and he was introducing me enthusiastically and in detail to each and every one of them. Bang! - Deal closed! Yet not a word of any potential business of any kind has been mentioned or discussed. We have only just met.

The rest of the day passed with Sandy proudly showing me around the entire farm and concluded seated by the massive open range fire in the kitchen, his wife Janet prodding me with queries of my life and treating me to her freshly baked scones; my genuine and enthusiastic approval of which dealt conclusively with any possibility of opposition to any business proposal from that quarter.

The next time I visited Sandy, he and his wife welcomed me glowingly at the door of their farmhouse. The day passed with heaped servings of Mrs.Duncan's hot girdle scones, mugs of farmyard tea and hilarious tales of city business executives whose pride, sanity and Armani suits Sandy had gleefully sabotaged during early morning rendez-vous in his bottom field.

Only as I was leaving did Sandy ask for the first time about 'business'. We exchanged a few words, agreed a course of action and shook hands.

And that … is how to close a deal.

Claim your special copy of my best-selling 'The Simplest Sales Strategy' by clicking on the image below. 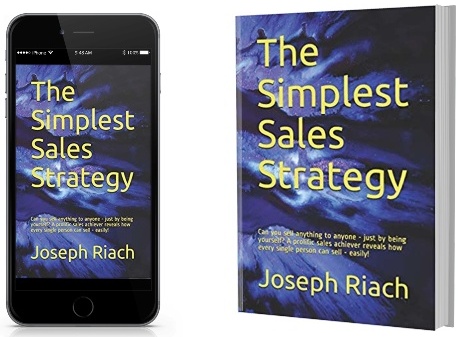 HOW TO CLOSE A DEAL  is an original copyright Tom Riach feature.
I hope you enjoyed this short article and found it to be of value.
To learn more please visit me on my Author Page.
See you there! Regards, Tom.