08/15/2018 was the 2nd anniversary of the death of The Queen of Soul, Aretha Franklin... That brought to mind the song that was what she was best known for, R.E.S.P.E.C.T. & that came into being at a time when it was most needed... I have much respect for my brothers & sisters of color...

I'll be forever grateful for all I've learned & am still learning from them... This is dedicated to Aretha for making it known to people like me who didn't have a clue but now I understand much more than I ever did... Thank you Aretha!

At 80 I've watched & even participated some in the civil rights movement... I realize how difficult & lengthy the struggle has been, the torture of a mother having to tell her child that some people won't like him/her because of the color of their skin... I never understood that since we don't think with our skin... This is just my opinion but because of recent events that have become like reality TV, only with much more horror, this just may be the straw that broke the camel's back... I think most people are finally starting to realize, “ENOUGH IS ENOUGH!”

This is one of my favorite songs because it says what is true...  I'm grateful for all the music from different cultures that I've discovered on Youtu.be... My life has been so enriched by it... I'm grateful to witness the world beginning to become liberated from the bondage of prejudice... I realize this is just the beginning but it's a small step in the right direction... I want to urge all who read this to plan on voting this November 3rd... It's none of my business who you vote for, just please vote...

Let's make it an awesome year from
my little corner of the world to yours! 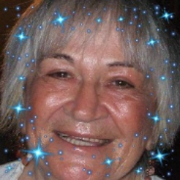 I am an 82 year old, Extraordinarily Happy Networker, Senior Blogger and Mentor in Training... I have 31 years of personal development and recovery under my belt... I'm a firm believer in one is never too old to learn... I've progressed from selfishly mourning the loss of my friend, Tom Barabas to celebrating his very accomplished life and that made me feel better... He brought so much beauty and pleasure into so many lives with his music... You can see more of his music videos on youtu.be