Sweet "I told You So" Moments In Marriage 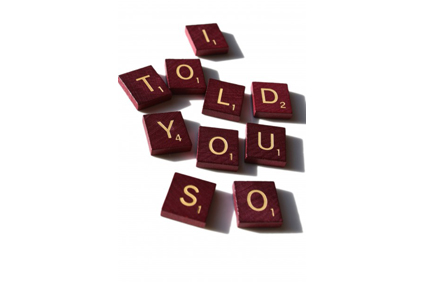 The moments in marriage that last forever through time. The "I told you so" moment is sweet but many times must be spelled out!

After 33 years of marriage I can surely tell you that "I told you so" moments are far and few in between, mainly because rarely do you see them unfold in front of your eyes.

Most of the time, you tell the spouse something; they don't listen then when your prediction comes true you are not there to reap the reward and...(you KNOW they don't tell you about it).

Once in a great while however you are there to bask in the glory of the covenanted words, "I told you so!"

Once such incident presented it's self to me one Sunday. I watched it unfold with glee and yet sadness...

Time and time again I had told my husband to put on his seat belt of course it fell on deaf ears. The police had stopped him more than once about the same thing, believe it or not he got out of the ticket like the time...

He was driving with out the seat belt of course. He saw the police officer and started trying to put it on! (Of course the police can't see you doing this right?) LOL

At any rate the officer pulls him over ask him why he's not wearing it to which my husband says, "Because they are dangerous, did you see me about wreck while I was trying to put it on?"

Okay so maybe honesty does pay because he (didn't get a ticket...shakes my head) anyway later he was driving me and my mom to Wal-Mart. I was happy because it was a fun shopping trip.

We are going down a major freeway when a Highway Patrol pulls him over. Now, don't know about where you live but here those officers are just NOT known for a sense of humor.

He walks up get hubby's license, calls it in, comes back telling him he's going to write him a ticket. The officer looks at me with the biggest grin ever on my face, trying so hard not to bust out laughing then he grins.

I was torn between glee and sadness. On one hand I was gloating over the obvious, "I told you so" yet knew it was a big fine and my Wal-Mart trip just got a little less fun! LOL

Didn't really matter because Wal-Mart didn't have anything I could have bought that would have been that much fun!

He NOW wears a seat belt!